"F.T.I. - Ferrovie Turistiche Italiane" (Italian Tourist Railway) is a recently founded (twenty years ago) volunteer association with a meaningful history behind itself. Indeed "FTI" has developed from the association "FBS - Ferrovia del Basso Sebino" and has taken national dimensions. FBS runs since 1994 the tourist passenger service on the Palazzolo sull'Oglio to Paratico Sarnico railway line and is supported in this purpose by the State Railway (Ferrovie dello Stato) and the local administrations. This line lies in Lombardy on the borderline between the provinces of Bergamo and Brescia and runs along the Oglio river. 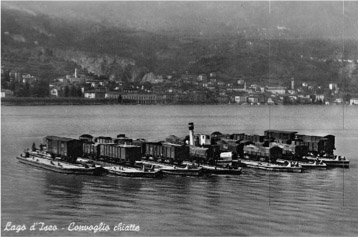 That's why in order to better understand what "FTI" does today we have to sum up briefly the history of "FBS". The 10-kilometers-long Palazzolo s/O-Paratico Sarnico line had been used since 1966 only by goods trains made up of waggons that until a few years ago used to be loaded on barges and transported through the lake to the Lovere steelworks. This rapresented the last combined service to be closed involving a european lake. Sarnico at the beginning of the XXth century (Nembrini archive). The old embarcation wharf for the barges in the first service years of the line. The volunteer-run association "FBS - Ferrovia del Basso Sebino" arised officially in February 1994 from a WWF section - where the first activities of this kind were born - and had the declared purpose to restore and manage the passenger traffic on the short line running to the Iseo Lake.

As soon as the summer of the same year, an experimental passenger service operated on the line thanks to the new collaboration between the State Railway and the volunteers association which was entrusted with many duties (survey of the many level crossings, fares selling in the trains, care of the stations green areas, funds collecting, and so on) - fist such case in Italy -. This new service was promoted under the catchword "by train to the lake" and had suitable features for Sunday tourism.

The experiment recorded over 4.000 passengers in nine Sundays; this great success was especially due to the good connections by train in Palazzolo s/o from and to Bergamo and Brescia and to the connections with the boats on the Iseo Lake

Many interesting news were introduced through the years and, together with different kinds of events such us nature, art and music events, they enhanced the interest on the experiment of 1994 and strenghtened it definitively.

The State Railway noticed this success and charged FBS with another line closed to stardard traffic: the 51-kilometers-long Asciano-Monte Antico line belonging to the Siena province.

Being in one of the most beautiful Tuscany areas (the Siena Clays, Montalcino with its "Brunello" wine, the Asso and Orcia river and the pure environment) helped overcoming the difficulties and so the Siena section of the FBS association was founded under the name "FVO - Ferrovia Val d'Orcia". Its project was called "TrenoNatura" and so did the tourist trains travelling in spring and autumn through the enchanting Tuscany landscsapes; the service was carried out by 50s Diesel rail-cars (Littorine) going back to the Fifties and attracted thousands of people who appreciated this peculiar chance and the charm of the nature.

Palazzolo, 1939 (Camossi archive) - Station inside Since then those kind of activities increased also on the Lumbardy line, they improved significantly (the most important of them was called "TrenoBlu", became a new logo for the association and departed from Bergamo) and recorded more and more success. 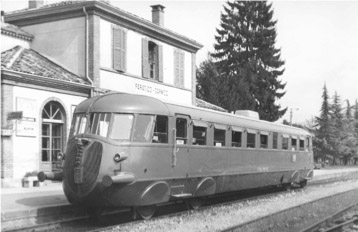 The FBS association had become a point of reference for many people all over Italy who intended to re-open railway lines closed to the traffic but embedded in an amazing natural or historical landscape, and so FBS was increasingly asked for an advice or a survey. In the autumn of the year 1997 another Tuscany section of the association was founded: "FCP - Colle Vald'Elsa to Poggibonsi Railway" purposed to operate the line with the same name. Unfortunately, the projects would not have been possible, so that in 2010 the section was disbanded following the decision of the two municipalities to build a bike path along the railway route.

In the meanwhile surveys were carried out and a report was drawn about the possibility to re-open the Fano to Urbino Railway in the Marche region; the first steps were taken to re-open as well the Sicignano d/A-Lagonegro line between Campania and Basilicata, the Pachino-Noto Line in Sicily (in the Syracuse province) and especially one of the most beautiful italian railways, the Castelvetrano-Ribera-Agrigento Railway.

Furthermore the association got in touch with other italian tourism railways (Sardinian Railway, Genoa-Casella Railway, Piedmont Railway Museum, other groups and associations) and foreign organisations (Provence Railway) in order to exchange experiences; in this way FBS joined the "F.I.F.T.M. - Federazione Italiana Ferrovie Turistiche e Museali" (Italian Federation of the Museum and Tourism Railways) - this association belongs to "Fedecrail", that is to say the european federation -. The seat of F.I.F.T.M. had established for many years in Palazzolo s/O together with our Association.

As a consequence of the increasing activities, a new association was founded with the name "F.T.I. - Ferrovie Turistiche Italiane" and it comprehended initially the three tourist railways FBS, FVO, FCP and later FTC.


Its next target is to preserve the railway heritage - from the tracks to the stations and the lines themselves - by applying the idea of tourism railway also to those lines where no train can momentarily operate; indeed FTI wants to introduce in Italy a new kind of tourism which is enjoying great success abroad: excursions by bycicles that are equipped to drive on railway tracks. 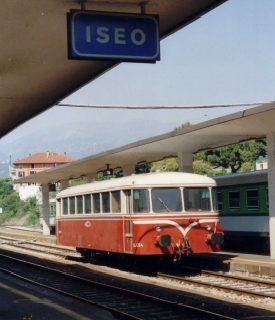 These kind of bycicles with 4/6 seats were once used by the State Railway to survey the lines. With the support of "Amico Treno" and other magazines, we have been searching for those old vehicles; unfortunately we had to record that they have almost disappeared from Italy and those remaining can hardly operate. As a consequence of this we have drawn up a new project together with other F.I.F.T.M. members, in particular M.F.P. (Museo Ferroviario Piemontese - Piedment Railway Museum); the project purposes to create a completely new prototype by Itera Srl (a time called "ciclotreno", now "ferrociclo") that will hopefully be ready as soon as possible. This will be the chance to apply this peculiar way to re-open dismissed railways also in Italy. Its advantages: the preservation of the environment, low costs and the possibility to use these preserved infrastructures in the future for rail services.

picture by A. Sgarbi Lately the association has bought some veteran rolling stocks like for example the historical railcar Macchifer Aln 1204 (Schienenbus kind) dated 1957. Closed the restoration by LeNORD and FTI at the Iseo Depot in the summer 2007 (just in time to be present at the great festival of September), the historical railcar, the last of its kind in Italy, is now out of order for bureaucratic problems.

Beside the historical rail-car mentioned above, FBS has lately gained four wagons built by "Officine Meccaniche Stanga" and dated 1936 (but still in good conditions). They belonged to the "Ferrovie Venete" and operated on the Parma-Suzzara line until few years ago. Unfortunately, after years outdoors (unable to shelter indoors) at the beginning of 2017 it was necessary to shoot down them for the bad conditions.

To the young purchases count also two Badoni with hydraulic-diesel traction (Mod. ABL, IV type dated 1957 and ABL, VI type dated 1964) and they will be employed to survey the line. In November 2009 has also arrived on the tracks of Palazzolo a "sogliola", type ABL IV N, dated 1938, donated to the Association by Trafilerie Gnutti in Chiari.

In 2012 was restored the last vintage rolling stock became part of the historical park of FBS: a “draisine 500”. Saved just in time from demolition, was recovered, restored and put back in perfect working by some members of the Association and is now available for any light work along the line.

A last consideration: this is what a volunteer association could create in a few years. These are the first important steps for a brand new branch that has great perspectives. Just look at the experiences abroad! We have to notice that other countries show much more sensibility toward this issue but still we would like to underline what a economic growth this environmental-friendly tourism could develop.